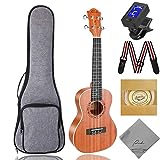 It is this one instrument that makes us dream in songs like „Over the Rainbow“: The ukulele , The guitar in miniature, as some say. It has the ukulele An interesting story.

In the ukulele it is a plucked instrument that is similar to the guitar. In general, that is ukulele covered with four strings, occasionally with eight or six. Standard copies are 20cm wide and 60cm long. The ukulele of the uppermost string (the 4th) owes its incomparable exotic tone, which is mostly octave. This means that this string is tuned higher than the others.

The ukulele does not have its origin, as one might think, for example from Hawaii but Portugal. Actually, from the Portuguese island of Madeira, where the Braguinha comes from, also a plucked instrument similar to the guitar. An immigrant named Joao Fernandenz just brought that instrument to Hawaii in 1870. There, the locals were so enthusiastic that they copied it and baptized in the name of „bouncing Flo“, which is called ukulele in their native language. But the first official ukulele is called „Nunes-Ukelele“ (1889), which became known worldwide. However, the ukulele only found its way to North America after World War II. From there, she finally came back to Europe, where she became popular in Germany at the end of the 1990s and was given cult status by Stefan Raab and Julia Nunes.

Nowadays, there are several different versions of the ukulele. Some models have a pickup (similar to the electric guitar), which comes with an effect device or guitar ampcan connect. There are offered at different producers ukuleles, which were modeled in function as well as form of other plucking instruments, such as the Electric guitar, Contragitarre or Resonatorgitarre. For guitar players who find the conversion difficult or not interested in it, the Gitalele was invented and created purposefully, a mixture of guitar and ukulele. However, transposition skills are required. A similar creation is also the Cuatro or Cavaquinho.

Incidentally, there is the banjolele, also called Ukelelebanjo, which was developed in 1971.

Anyone who wants to buy a ukulele needs to know in advance what he wants for one. Ukelele is not the same as ukulele. As with guitars, there are some for beginners and professionals. Those who are familiar with it know best what to pay attention to. How do the sounds sound? How can the strings be tuned and what is the material of the ukulele, such as the length of the neck, etc. Beginners should take it easy before venturing to the same level. However, you should invest at least 50 EUR in the ukulele, because cheaper products quickly lose their mood. The following ukuleles for beginners can be recommended:
– Kala KA-S: wood species mahogany. Strings are made of Aquila Nyglut.
– CASCHA EH 3953: wood species Linde. Best nylon strings.
– IBANEZ UKS10: Mahogany wood. Strings are made of nylon.
All three are Sopranukulele. The vocal ability is kept simple, which is very easy with the Kala KA-S. The feel as well as the sound lies in the category upper class. The value for money is very good to excellent. The three ukuleles are most suitable for beginners due to their simplicity and quality.