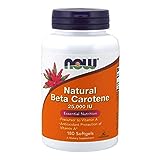 Beta carotene is a provitamin. The chemical compound occurs naturally in many fruits and vegetables and is added to foods to make them appear yellow, orange or red. The provitamin is liposoluble and is absorbed by the human body in combination with oil Vitamin Aconverted. This vitamin has an anti-inflammatory effect, is said to prevent heart and cancer and is also good for the eyes. As Dietary supplementsit is also available in high doses for those who do not have the opportunity to naturally take enough vitamin A. In holistic medicine will be Beta carotene In the context of nutritional advice paid much attention. It should prevent Alzheimer’s and various muscle diseases.

It’s not always that easy with the vitamins. Those who do not have enough of them live just as badly as the one * who has the chance of it. The daily need for vitamins can actually (even in the case of Beta carotene or vitamin A) with a few servings of fruit or vegetables. But this only works as long as the body metabolizes the vitamin well and there are no food intolerances. This is where the so-called nutritional supplements come in, in which Beta carotene from the chemistry lab is included. Mostly the dose is so high that a single pill or tablet is sufficient during the day. Who is in the situation, on this form of vitaminsHaving recourse should be clear about the side effects – they are not always listed on the package. Dietary supplements, like medicines, can only be taken after consultation with a trustworthy doctor. And there is also the second problem to settle: Since many foods are no longer consumed natural, but are highly processed, there is a lot of every day Beta carotene on the menu or drink plan. Beta carotene is in fruit juice drinks to make them look orange. In the tomato sauce and ketchup, it provides red color, and the Gouda is so beautiful yellow. Quantities are missing in most cases, so you can never really be sure how much of the provitamin you actually eat.

Of course in fruits and vegetables

Not all fruits and vegetables contain beta-carotene. But in apricots, carrots, peppers and pumpkin, spinach and chicory is a lot of it. Kale and savoy cabbage each have 100 g or more than 8 mg beta-carotene, and traces are found in beans, courgettes, broccoli, iceberg lettuce, tomatoes and parsley. For intake in the body, it is important that with the fruit or vegetable meal necessarily also some oil or fat is absorbed. In this respect, the cheese grated lettuce, the bacon in beans and tomato sauce and similar refinements have their right to exist and should not be omitted altogether as a calorie-saving measure. From shredded fruits and vegetables, the vitamin can also be better absorbed, so chewing well worthwhile. It is also interesting to note that nutritionists currently assume that carotenoids (beta-carotene and similar compounds) first obstruct each other in their intake and secondly that they are absorbed under optimal conditions to a maximum of 50 to 70%.

Less beta carotene due to addiction

It is not known exactly why the body metabolizes beta carotene proportionately and never completely absorbs it from the food supply. However, it is known that the consumption of alcohol and smoking greatly inhibit the intake of provitamin. Beta-carotene as a dietary supplement may be interesting for smokers and people who drink more often. During pregnancy and lactation, however, additional beta-carotene is not recommended. And also in cancer therapy, the provitamin is not much to look for: beta-carotene is proven to be no cure for cancer. However, a lifelong adequate supply of provitamin can prevent, delay or even prevent cancer. Because beta-carotene helps the body to capture the free radicals involved in the development of cancer and render it harmless. Paradoxically, several studies and trials suggest that taking high-dose beta-carotene supplements could do the opposite and more likely to be cancerous. It seems like the right amount is crucial here.