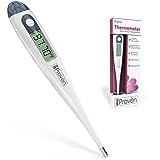 A natural and easy method of family planning

Basal thermometer on the test bench

Determination of body temperature: an achievement

That man can measure body temperature and draw conclusions about illnesses or other things is truly a human achievement. Classic thermometers work according to the expansion principle. The fact that air expands in the warmth was already known in antiquity. The Greek physician Galenos of Pergamon, Galen for short, introduced the degrees of heat and cold in the second century AD. Galileo Galilei seems to have known an instrument for measuring heat. Santorio Santorio, a doctor from Padua, already used thermoscopes to measure temperature. Thomas Clifford Allbutt, an able physician, invented in 1867 the so-called short fever thermometer, which was quite similar to the extension thermometer still used today. At least since the late 19th century, the clinical thermometer was quite widespread. Without the helpful device, van de Velde would not have been able to make his discovery. A first basalt thermometer went into production in 1959. It was developed by the family business UEBE, which has been based in Wertheim since the 1950s.