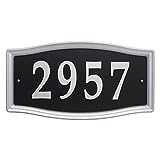 Every house entrance is in Germany with a House number Provided. The numbering is subject to strict rules and is written down in the land register of each built plot. The change of one House number is not possible without official approval. In addition, there are historical and monument protected buildings special rules, what the design of a House number As. A House number is always visible to a house entrance to assemble to identify this clearly.

History of house numbers – the first step is Paris

Before the House number was introduced, there were signs on the houses or labels. The easiest way was to name houses. This was the rule, especially on farms, although it was not always possible to draw conclusions about the owner. Because the house name could also be assigned to another naming. The first houses were numbered on the Pont Notre Dame in Paris in the 15th century. In Germany the city of Augsburg started in 1519. It takes until the 18th century, before more houses received numbers and the classification was declared a standard.

The beginning took place in 1724 in Paris, the last major city in Europe was Berlin in 1799, which introduced house numbers. Until then, these included Madrid, London and Trieste. In the century, the house numbers were also included in addresses. Anyone who wanted to send a letter at that time had to add the exact house number so that the mail could be transferred without errors.

Use of house number in Europe

An interesting feature is, for example, in border towns between the Netherlands and Belgium. To clearly assign the entrances to a country, the house numbers are marked with the national flag. To prevent the citizens that the postman from the respective countries the post office in the wrong mailboxestoss. Because often houses are built on both territories. To determine the affiliation to a state, the entrance to the house is crucial. If this is also on both national territories, then the house entrance length decides. If this is only a few millimeters further on a national territory, the house will belong to this state.

There is also something special in the Italian town of Gorizia. The city area flows fluently into the Slovenian town of Nova Gorica. Here the border is marked with flower tubs and road stones. In order not to exchange the house numbers, fences are drawn around the plots of the Slovenian part.

Strikingly many houses in southern Europe not only carry the house number on a sign, but also the street name. Many municipalities fail to attach all street names to street entrances. To counteract this, more and more residents decided to dial house number plates with their own street name. Thus the delivery of the post office was facilitated. In addition, visitors were able to identify houses faster.

German homeowners have to take care of that

Attaching a house number in Germany is the responsibility of the homeowner. However, the award is subject to the local building authority. Without its permission, homeowners are not allowed to select a house number. In particular, home builders must consider the regulations. In Berlin and Hamburg there is the strict regulation that house numbers must be illuminated, although that is still not the case everywhere. In particular, emergency services should find the right house number easier at night and in poor visibility.

Standard house numbers are made of enamel with blue background and white writing or white background and black font. When assigning the license plates, there may be additions of letters. This happens when a building has several entrances.

Many holidaymakers who live in southern countries like to bring home house numbers made of ceramic. These are mostly decorated in a picturesque way. Whether such house-number-platemay be applied for, must be inquired in advance at the municipality.