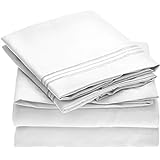 Indispensable part of the bed linen: The Bedsheet
Covers for pillows, bedcoverand sheets: So much laundry in the beddid not always exist. While there have been beds in which people sleep for several thousand years, the history of bed linenand the bed sheet significantly younger. For example, the Romans stuffed their mattresses with straw, reeds, wool and feathers so they could sleep softer. Originally either fur or straw mattresses in the beds and on the mattresses, as they were better at night. The Egyptians were the first to weave a sheet of linen, with which they used the mattresscovered. In Europe, women later turned the flax into linen, weaving it Bedsheet and pillowcases. Since the 17th century, it has gradually become common for bed linen to be a dowry of marriage.

Cotton instead of linen
Only when cotton was grown in the South of America and the production of the fabrics was thus easier, cotton fabric was used for the production of bed linen. From 1860, the cotton prevailed against the linen, especially since it became more affordable thanks to the then modern weaving machines. After the invention of synthetic fabrics these were mixed with the cotton fibers, so the fabric was easier to weave and the laundry was easy to clean. Until then, bedding was purely functional, it was woven from white fibers and decorated at most the pillow with embroidery. With the Bedsheet The mattress is covered to this day and protects it from dust, dirt and abrasion. Every night we spend in bed, we lose not only sweat, but above all countless dander. These serve the house dust mites as food. While it would be difficult to clean a mattress from it, it takes Bedsheet just pulled off the bed and in the Washing machineto be washed.

Sheets: A name for many textiles
Originally that was Bedsheet simply a rectangular piece of cloth, first of linen, later of cotton or cotton blended fabric. Meanwhile, there is a whole series of textiles under the term bed sheets. Each bed sheet is designed for a specific bedding or mattress model: while the Fitted SheetsSmooth over the mattress and thanks to the sewn-in rubber at the edge also remains wrinkle-free, a simple sheet must be smoothly struck under the mattress. Furthermore, the sheets are differentiated according to the beds they are intended for: There are special bedsheets for waterbeds, for airbeds and for boxspring beds.

The right material for a restful sleep
Depending on the temperature and personal preferences, there are sheets in a variety of materials. Most bed sheets today consist of either cotton, a cotton blended fabric or silk. For the colder season, there is also terry or Beaver, which keeps particularly warm. Everyone cares about their personal preferences, each person prefers his own individual material. That’s why there are also satin and jersey sheets. Linen sheets are also available. The durable fabric is suitable for all seasons, stays cool in summer and keeps warm in winter. If you want to spare the mattress even more, put a pad between this and the sheet. The mattress pads are made of a special cotton, Molton, woven. They are particularly dense, but breathable at the same time, do not let viruses or bacteria through, are allergen-and liquid-tight. That is why these protective sheets under the actual sheets are particularly suitable for people with heavy house dust or other allergies, travelers and children.

The necessary hygiene: How often should a bed sheet be changed?
For a good night’s sleep and to keep the bed clean, bed linen should be used and occasionally changed. Every night, people lose not only sweat, but also dander, from which the house dust mites feed. The excretions of these animals, which are invisible to the naked eye, can cause allergic reactions. Normally the sheets with the bed linen every two to four weeks deducted and washed. However, if you are already allergic, the sheet should change weekly, as well, if someone sleeps naked in bed or has his pet in bed.