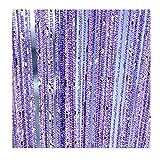 Of the beaded curtain At the moment, as part of the far-reaching retro trend, it is about to experience a new economic upswing, which can be attributed to several reasons. Because the spatial element is not only the most diverse and perhaps most attractive within the large group of door curtainsbut with its slightly romantic, creative charisma and its simple functionality meets the core of the current taste of the times. The vintage flavor of the bead curtain is not limited to the quirky bar culture of the 60s and 70s, but is fed by its origins in the ancient Orient, which is most vaguely aware.

A mysterious door guard from the East

Of the beaded curtain is a several centuries old invention from the East, which was transported mainly from the mid-20th century to America and Europe. Above all, Hollywood and cultural historical film strips were involved in this development, so that from 1960 the beaded curtain became a real fashion accessory for the home. The decoration aspect and functionality go hand in hand with this room element, because the long, jingling pearl threads not only create a dreamy atmosphere, but also act primarily as protection against unwanted guests in the living area.

The purpose of the bead curtain and its deployment alternatives

Basically, pearl curtains are used to keep away insects. The pearls, which are raised on long strands, form a movable surface that flies, wasps or tailors with their filigree bodies can not penetrate, but which does not pose a barrier to humans. The most common place of application is the classic one patio door, in which the function of insect repellent comes into play. However, other functions are also important, such as, for example, to some extent privacywhich may be more or less effective depending on the density and style of the curtain or even a decorative and not too definite division of rooms to be divided into different areas of use. For example, a living room can be divided into a dining room and a living room or into a bedroom and a dressing room. Even as a bed curtain, the beaded curtain to create insect-free sleep quality and intimate privacy.

Types and materials of beaded curtains

The basic principle of the beaded curtain is defined by the simple construction of small, threaded, solid elements on threads that are mounted side by side on a main ledge. This basic design opens up a wide field of creativity that has been exhausted in the years since the invention of the bead curtain. The threaded elements do not necessarily have to be pearls; many other materials such as wood, plastic, glass, bamboo or metal have also been experimented with. Other natural forms such as shells, snail shells or larger seeds are an attractive alternative. In addition, by using different threading materials or differently colored beads, it is possible to produce beautiful patterns that act in the entirety of the hanging curtain surface. There are no limits to imagination and creativity.

Anyone who wants to buy a beaded curtain should pay attention to the following aspects. The models available today offer a wide variety of models that, in addition to the different designs, also have different functional focuses, so you should be aware in advance of the desired purpose and location. Should the curtain primarily prevent insects, but be the least possible barrier for people and light? Then choose a filigree model with bright pearls, such as the „Kristal“ model by Leguna, praised by customers for its good translucence and elegant sheen, or Kobolo’s „Samara“ curtain made from light-wood beads. If you want an effective privacy, darker models like the Curtain „Menam“ by Conaacor, whose strands are densely covered with dark lacquered wooden tubes and fruit pits, provide a fairly closed surface. Models made of bamboo tubes bring an atmospheric Far Eastern atmosphere into the room and score with natural quality, but are also quite fragile. In terms of price, bead curtains are usually available in a range of less than 10 euros up to about 50 euros.