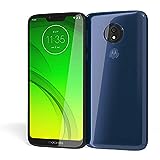 Many may still remember the well-known and in their time very popular Motorola phones, for example the Motorola RAZR V3. After that, for a long time it was very quiet around Motorola. Meanwhile, the American Handypionier again has a whole range of modern smartphones in four different performance classes on offer.

Motorola smartphones of the Moto C family – the entry-level models

Motorola smartphones of the C families are the entry-level models from Motorola. In this series, Motorola offers its customers two different models. The Moto C and the Moto C plus Smartphone, Both devices have a 5 inch HD display and work with the Android 7.0 operating system. Both have in common a front and rear camera as well as a Dual Sim card slot. The battery is identical in both models and has a capacity of 2,350 mAh. The difference between the two smartphones lies in the resolution of the back camera. The resolution is 8 MB for the Moto C plus and 5 MB for the Moto C. The smartphones of the Moto C series are well equipped entry-level model for a very attractive price.

The two Motorola Moto E and Moto E Plus 4th generation smartphones offer more power, a metal housing and a powerful battery. The Moto E4 Plus is equipped with a 5,000 mAh battery (2,800 mAh for the E4). The special feature of both smartphones, however, is the fingerprint sensor that is otherwise found only on much more expensive smartphones from other manufacturers. The rest of the equipment with 5-inch HD display, quad-core processor, up to 128 GB expandable memory and the Android 7.1.1 Nougat operating system can convince. If you are looking for a powerful smartphone with modern features at a good price-performance ratio, you should take a closer look at the Motorola 4 Series Genomes from the Moto E family.

Brand new are the upper class smartphones from Motorola called Moto G and Moto G Plus. Just 5 sensors – one fingerprint sensor, acceleration sensor, gyroscope, ambient light sensor and proximity sensor all belong to the Moto G family. 1.4 and 2.0 GHz Octa-Core processors and 2 or 3 GB of RAM ensure fast processes. High-resolution cameras on the front and back allow for crisp, clear images. Also, the displays with a full HD resolution (1080p / 1920 x 1080 pixels) shy no comparison. Pleasantly the polished aluminum housings are in the hand. The smartphones of the Moto G series convince even techies with their performance and above all with the low price.

The top class Motorola smartphones of the Moto Z family

If you are looking for something special without spending too much money, you will surely find it in the Motorola smartphones of the Moto Z family. 5.5-inch AMOLED displays with Full HD resolution, rear-view cameras with up to 16 MP resolution, fast Octa-Core processors and up to 7 built-in sensors are just some of the outstanding features of these top-of-the-line Smartphones from Motorola. Bluetooth, Wi-Fi and NFC enable smartphones to communicate directly with other devices. If you want to save a lot of data, a memory that can be expanded to up to 2 TB offers more than enough space. The features and high-quality workmanship of the Motorola Z family smartphones can easily compete with other premium smartphones. Only the price must be beaten. Here are the Motorola top equipment incredibly cheap.

With the newly introduced in the recent past smartphones Motorola has again found the connection to the well-known manufacturers and even exceeds their devices on some points. Motorola offers the right smartphone for every requirement. All are well equipped and convince with a very good price-performance ratio.