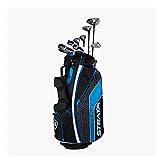 Since the beginning of golf, the golfer’s equipment has changed considerably. Golf clubs are now manufactured by dozens of manufacturers for all types of players and adapted to all performance levels. Especially the beginner is often overwhelmed with the selection of matching rackets. This article is intended to give a first insight.

Part of a racket set

Unlike the name suggests, wood is no longer made of wood as it used to be. Today, these clubs are made of a metal mix, with titanium playing a very large part in it. In general you will find a wood 1 – the driver, a wood 3 and a wood 5 in a player’s bag. These sticks are mainly used by tea.
The so-called hybrid, which is very commonly used today, is a mixture of a wood and iron racket. It should combine the advantages of a wooden club (longer stroke length) with those of an iron club (higher accuracy and easier control).

Iron clubs are used on the round of golf either for tee off at par-3 or for fairway play. Iron 1 to iron 5 have a significantly longer stem than iron with a higher number. They are therefore also referred to as „long irons“, the remaining irons as „short irons“. Iron 1 to iron 3 are barely in use today, but are replaced by the above-mentioned hybrid racquets. The pitching wedge and sand wedge are used for short approaches around the green or for playing out of the sand bunker.

Putters are used on the green to score the ball. Putter is available in countless variations and many ambitious golfers are looking for a long time to find the right putter for them. For many golfers the putter is the most important racket in the bag.

In addition to the brand providers such as Mizuno, Ping, Callaway or Wilson also very often complete golf sets are offered by unknown manufacturers for a surprisingly low price. From the purchase of such a set, the budding golfer should rather distance, because the poor quality can take the beginner quickly enjoy the game. For starters, it’s enough to start with half a sentence. This half sentence should then be chosen from the range of a renowned manufacturer. The following clubs should be included:
– putter
– Hybrid racquets
– iron 5, 7, 9
– pitching wedge
– Sandwedge
On a wood can be dispensed with in the beginning.
It goes without saying that special emphasis should be placed on high fault tolerance when selecting clubs. So the ball should fly half way in the desired direction even if not optimally met contact. Blades, as they play the pros, while the „Shapen“, so the turn of the ball, facilitate, but forgive any mistakes in the moment of impact.
If you are still unsure which clubs from which manufacturer for you are eligible, then take advantage of the demotage, which are offered on many golf courses in the regions. There, manufacturers provide their products for comparison.

This is a point that is underestimated especially by newcomers. Every golfer has different physical requirements. The set of clubs used should adapt to these requirements, not the other way around. When fitting the matching clubs are selected depending on the swing speed and the natural swinging motion and adjusted in the possible scope. The lie and grip size are just two aspects that must be considered. Equally essential is the decision as to whether graphite or steel shafts are used.

In general, a bogey golfer knows quite well which clubs he wants in his bag. For the majority of golfers with a medium handicap, the following assortment of racquets has been proven:
– putter
– Iron 5, 6, 7, 8, 9. Sandwedge, Pitchingwedge (additional Gapwedge if required)
– Hybrid racquets
– Wood 3, 5
– Driver (Wood 1)
14 clubs may be carried on a turn, so the above compilation still leaves room for one or two more thugs.