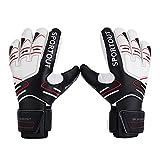 but after this first patent, not enough. In fact, the Briton William Sykes filed for patent in 1885, but it was not until the 1940s that goalkeeper gloves were worn for the first time during a football game. And that was not even a Brit, but the Argentine Amedeo Carrizo. His worldwide triumph had the Goalkeeper glove from 1970. Throughout the Football World Cup in Mexico, the British goalkeeper Gordon Banks wore the gloves(for the first time ever during official competitions), and the game against Brazilian star Pele has become legendary. The sense of the gloves was proven, and they were perceived as cool anyway. The big rescue stat 1970 against Pele was later called the biggest goalkeeper parade ever. From the 1970s it was in the interest of German football to develop useful goalkeeper gloves, the company Reusch took on the problem together with Sepp Maier.

Based on table tennis rackets and medical rubber gloves

The first goalkeeper gloves in history did not look like the models we know today. The gloves were used alone to protect the hands from injury, they should take the impact of the ball the force. Accordingly, they were made of rubber and had a coating such as the rubber coating of table tennis rackets. These were the gloves which Wolfgang Fahrian launched in Germany in 1966 and which could not really prevail. From the 1970s, Sepp Maier had taken on the problem, in collaboration with real football players now created rather practical goalkeeper gloves. They were developed on the basis of medical rubber gloves, the first so-called soft-grip goalkeeper gloves. They were no longer protection for the hands, but a real catching aid for the goalkeeper. Since the late 1990s, the manufacturers of sportswear, such as Nike, Reebok and Puma, produce goalkeeper gloves.

Today’s gloves are made of an adhesive foam, which consists of latex, synthetic latex and some other components. The glove areas must be soft and cushiony, hard enough not to wear out, let them move and still protect the bones. The stresses to which the gloves are exposed are different in wet weather than in dry weather, in fog other than in rain, and on a natural grass other than on an ash field, which in turn differs from artificial turf. Accordingly, the manufacturers have different models of gloves in the range, the adhesive foams were partially cured with graphic particles or otherwise adapted to the conditions (for example, the Aqua Tech by Adidas). The upper hand of the gloves is usually coated with latex, with more cost-effective gloves sometimes with PVC. Inside, the gloves are lined with mesh to ensure air circulation in the glove. In the area of ​​the joints on the fingers are again other materials in use, which should increase the mobility of the fingers. After all, the goalkeeper sometimes has to fumble the ball, which works only if he can clench his hand into a fist – which would prevent a thick glove made of hard material. The gloves are attached by Velcro, often in addition to the wrist bandages made of neoprene or textile attached.

Not just for footballers

Goalkeeper gloves in one or the other version are used in many ball sports with goal, not only in the Soccer, However, the stresses vary, so that depending on the sport and the gloves are quite different. Incidentally, many goalkeeper gloves have protection rods in the upper hand, which are intended to prevent a kinking and snapping back of the fingers. This minimizes the risk of injury. However, these bars are associated with less flexibility, which is why most professional goalkeepers take them out of the gloves as long as they do not have a serious injury (which would require extra stability).