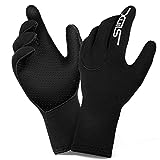 Diving gloves are an issue that has certainly occupied every diver who dives even in colder regions. glovesfor divers can be divided roughly into dry, wet and semi-dry diving gloves. Considered in detail, however, there are various other differences – even inside the gloves. The different glove types are currently available in well-equipped dive shops or dive shops.

Dry Diving Gloves are complementary to a dry suit. These gloves are basically made of waterproof materials such as compressed neoprene or similar waterproof material. Neoprene has the better self-insulation. Other models, on the other hand, must be supplemented with underwear gloves, which can be made of fleece, for example.

Wet-diving gloves are usually made of neoprene and are preferably suitable for warmer waters. On the one hand, the thickness of the neoprene used is often very thin and is between three and five millimeters. On the other hand, these wrist models have no special closures that could make it difficult for the water to penetrate. This means that the water is retained only because of the exact fit.

Semi-dry diving gloves are also made of insulating neoprene. Compared to wet gloves, the material is usually much thicker with more than five millimeters. Here are also in the wrist area special closures available to reduce the ingress of water. For example, smooth-skin neoprene is processed, which can be completely sealed in combination with a cuff of the dry suit. The seams of the semi-dry gloves are also made so that no water penetrates.

Most diving gloves are therefore made of neoprene and isolate in principle as well as the classic wet suit, On the one hand about the material thickness and on the other hand about the minimal water film, which develops between skin and material. The latter heats up by means of the heat released by the diver. In addition, the processing and material details have a positive effect on the insulation. These are designed to minimize the flow of water within the diving gloves. Special cuffs on the wrists as well as specially sealed seams play an important role here.

In comparison to semi-dry or wet diving gloves, dry diving gloves remain completely dry inside. This type of diving glove is available to retailers as ‚Crushed Neoprene Gloves‘ (the neoprene has been subjected to massive pressure during manufacturing, which significantly minimizes the amount of air it contains) as well as other specially water-impermeable materials. Dry diving gloves have their origin partly in occupational safety and remind by their appearance of cleaning gloves.

Since the material here is only worked out very thinly, the insulation is basically done by the underwear gloves. These are usually made of lightweight fleece. However, depending on the area of ​​use for which the dry diving gloves are intended, their material thickness may vary.

Especially important for dry diving gloves is that ventilation is possible. This means, if gas is added to the dry suit, it is absolutely necessary to ventilate the diving gloves too! This can be done either through tubes located below the cuff on the diving suit or over the underwear gloves. However, if there is no connection, the air inside the diving gloves is compressed in such a way during the diving that the movement of the hands is almost completely restricted or pain arises. Furthermore, the entire isolation would be lost!

Which diving gloves are used now depends on where and when the dive should take place. For extended dives in cooler waters or in extremely cold water, dry-dipped gloves are more suitable. However, there are also some passionate divers who wear semi-dry diving gloves during the dive even in winter. So you always have to look at the whole isolation strategy – otherwise your fingers will be cold!