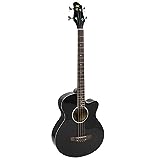 Of the Acoustic bass is a rare to see acoustic bass guitar. It has a sounding body like one Classical guitar, is tuned like a bass (electric bass or double bass) and transmits a sufficient sound without sound reduction. That makes a difference Acoustic bass from the bass guitar.

Acoustic basses are built like western guitars, whereby their body can not be big enough because of the transmission of the deep bass frequencies. This in turn makes playing difficult, which is why they are not as prevalent among musicians as electric basses. An original double bass is not so great in vain, its tones would otherwise hardly be heard. This opposite has the Acoustic bass of course the advantage that it is considerably smaller. From the 1950s, electric basses were built, as the technique of sound pickup and transmission made a satisfactory sound possible, later came the Acoustic bass on. It allows a satisfactory bass sound without electrical amplification in smaller rooms. With many bands playing in smaller clubs, that may be enough. However, the bassists equip theirs Acoustic bass usually with a pickup, as do guitarists with a classic classical guitar. If necessary, the instruments can be strengthened with it. This is often necessary, but not really intended: the musicians and the audience rather want the unadulterated sound of the instrument, which even a high-quality sound pickup can never reproduce. This always speaks for a double bass, but its transport is very laborious, and sometimes it has to be reinforced (in the rock, jazz and pop area). Since the musicians rather use the acoustic bass.

Mood and playing style with an acoustic bass

The acoustic bass is tuned like a double bass or an electric bass guitar in the fourths E, A, D and G (from the lowest to the highest string). As a five-string, an H-string is added below, in very rare cases above a C-string. There are even six-string in the mood H-E-A-D-G-C. The playing style is the same as on the electric bass guitar with the tendency for a concert guitar, so sitting with the acoustic bass on the left (!) Thigh. Standing, the large body is still difficult to hold by smaller musicians in spite of carrying strap. The gripping with the left hand differs fundamentally from the double bass handles due to the hand position, also attacks on the double bass of the musicians in low registers from the second to the fourth finger only a semitone. On the Acoustic Bass he can grab a semitone because of the frets also from the second to the third and from the third to the fourth finger. The right hand can with and without Plectrumplay, both have their own charms. How the musician decides will depend very much on the style.

The Stoll Acoustic Bass has a particularly large body and thus allows a comparatively good sound pressure without any amplification. Musicians almost always play him sitting. He is suitable for „Jazz in the Chamber“. The American Ernie Ball Incorporation offered after 1970, the equally large Earthwood Acoustic Bass, which played, for example, Brian Ritchie (Violent Femmes). Paul McCartney played a semi-acoustic Höfner bass, but he has to be removed in the concert. The Takamine B10 Acoustic Bass is again very large and tends to double bass. There are even more such instruments that even bring a sting, a tailpiece and F-holes like the right double bass. In principle, the acoustic bass is recommended for big bass players with a penchant for jazz and world music, which in turn tend to occur in smaller clubs.