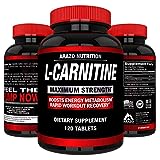 Naturally occurring compound of amino acids
L-carnitine consists of the amino acids methionine and lysine. As a receptor for specific fatty acids in the cytoplasm, it is involved in the energy metabolism of the human body. Together with coenzyme A, it has a vital function in the mitochondria (cell organelle). Only to that L-carnitine bound, long-chain fatty acids can be transported through the membrane of the mitochondria.
In our organism becomes L-carnitine partly self-formed and most of it absorbed through food. Red meat of lamb and sheep is rich in L-carnitine , Vegetarian foods, on the other hand, contain no or very little of the essential amino acid,
In a mixed diet, the daily intake is between 100 to 300 mg. People who consciously avoid egg and milk products (ovo-lacto-vegetarians) consume up to 25 percent of the required daily amount. In a vegan diet, only about 10 percent of the daily needs are covered by the food supply. The rest is produced by endogenous synthesis using vitamins B6 and C, as well as iron and niacin.
The bioavailability of L-carnitine from the ingested food includes up to 87 percent. However, the absorption is strongly dependent on the carnitine content of the food supplied. In the body can be about 20 to 25 grams L-carnitine get saved. The individual reserve is 98 percent in the skeletal and cardiac muscles.
The standard value of L-carnitine in blood plasma is between 40 and 60 micromol / liter.

As Dietary supplementscontroversial
L-carnitine is water soluble. As a result, up to 20 mg are excreted by the kidneys daily. About unbound L-carnitine, the body can have up to 85 percent. The rest is esterified as so-called acetyl carnitine.
Especially kidney patients lose valuable L-carnitine during blood washing (hemodialysis). The losses must then be compensated intravenously or orally.
The production process of L-carnitine mimics the biosynthesis in the human organism. By bacterial fermentation, a precursor of L-carnitine gradually transforms to the desired end product.
After major sporting challenges, the supply of L-carnitine proves to be supportive of the regenerative ability. But a permanent supplement by L-carnitine in sports and fitness is controversial. It can cause the natural formation of the amino acid in the body is increasingly adjusted.

The Dusseldorf consumer center concluded in a statement from 2004, the mode of action of L-carnitine to increase performance, as a slimming agent and Fat Burner, Anti-cancer and potencyout. However, researchers from the University of Rostock confirmed that slightly overweight people significantly better metabolised the long-chain fatty acids with a dietary supplement with L-carnitine.
In a blind study at the University of Greifswald in 2012, patients with progressive pancreatic cancer were given 4 grams of L-carnitine daily. As a result, life-threatening weight loss (cachexia) could be delayed or prevented. In contrast, a study of shampoos with L-carnitine against hair loss in 2007 showed no significant effect.

The comparative winner of the products offered for supplementation with L-carnitine is the Olimp Iso Plus. The powder is available in the lemon flavor. The isotonic drink is also enriched with other nutrients and vitamins.
In comparison of price and performance, the Vitasyg L-carnitine won. The preparation in capsule form shows good activity. It is made in Germany and meets the highest quality standards.