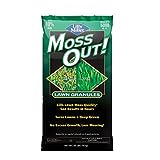 Moss is a problem for many garden owners. But what is moss anyway? Moos are comparatively simple plants that grow low on the ground and appreciate shade and moisture. Therefore, they also occur in nature mainly on forest soils or moors. Under favorable conditions, moss also spreads in lawns. But before that happens, that is raceno longer in optimal condition: either the soil is compacted and thus poorly aerated, or the nutrient content of the soil is too low. In many cases, the soil moisture is too high or the soil over acidified. Shady lawns are particularly vulnerable, as the soil moisture is higher there and shade is an optimal location factor for moss.

Due to these conditions the turf plants die and holes are formed in the green carpet, Only then is the way clear for the settlement of mosses. These multiply by means of spores, which makes their propagation particularly easy. Last but not least, the season also plays an essential role. Autumn and winter weaken intact lawns due to fallen leaves and overgrowth, which is why lawn enthusiasts often have to face a mossy lawn in the spring. Because the moss destroys the look of a well-manicured lawn, most lawn owners want to get rid of the moss quickly. Come to this Moss Killers in the game.

The advantages and disadvantages of various Moss Killers

In the trade are different Moss Killers offered, for example chemically in pure form or as a mixture with fertilizer, Among other things, destroyers with acetic acid or the herbicide quinoclamine are used. A frequently recommended Moss Killers is iron fertilizer (ferrous sulfate). It reliably kills moss while fertilizing the lawn at the same time. Those who use iron fertilizer, should distribute it exclusively on lawns, as stones and Co. are discolored by the iron. In addition are gloveswhen applying the agent duty, also a respiratory protection is recommended.

No matter which of these agents a lawn owner uses, in any case it is important to water the lawn after application. If the moss has died, the dead plant material must also be removed and a seeding of grass seed attached. There no Moss Killers is 100% safe and requires intensive manual reworking, it is worth considering using alternative moss removal methods. At least the iron fertilizer is so problematic that the Federal Environment Agency recommends to dispose of the dead moss as hazardous waste.

Moss killers are not the only way lawn owners can dispose of the moss. Hobby gardeners should primarily prevent the moss settlement by caring for the lawn. This begins with the creation of the lawn, because for this purpose only high-quality seeds on a loose, nutrient-rich soil should be used. In addition, by correct mowing (i.e., mowing weekly rather than too deep during the growing period) the turf can be compacted. A dense sward prevents moss growth. It is important to avoid drying or overgrowing the lawn. From time to time an extensive fertilization is necessary, so that the lawn can oppose the moss something.

If the lawn is already heavily interspersed with moss, lawnowners can even without moss killer by means of Verticutterremove the moss again. After scarifying, grass seeds should be reapplied on the treated area to quickly close the gaps. Since moss plants do not hit deep roots, coarser moss surfaces can also easily be collected by hand. But sometimes the location conditions for a lawn are too bad, so any method that gardeners use to dispose of the moss is ineffective. In that case, a complete re-planting of the lawn can be a last resort.