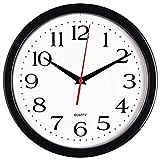 Time is one of the most important things in our lives. It determines every moment of our existence, even if we are not always aware of it. Accordingly, it is therefore important to know the time, especially the current time. For this purpose, there are an unmanageable number of watches. As our everyday life becomes increasingly stressful, the number of mobile watches in particular is increasing significantly and thanks to the smartphone there is practically always a clock nearby. But while most watches have been degraded to mere commodities and are often only numbers on a screen, there are still watches that are made in addition to the practical aspect in terms of aesthetics. Although one thinks of valuable wristwatches first. However, these are not always the best choice. Especially for decoration purposes in the apartment larger, stationary clocks are of particular importance. An example of such models are wall clocks. On the one hand, they are practically readable at the time, on the other hand, it is a decorative object that should be chosen to match the rest of the interior design and this complements accordingly.

Quality features of a wall clock

The two most important quality features of a wall clock are the accuracy and the lifetime. The lifetime depends on many factors and there is little difference, whether it is a luxury version for several 1000EUR, or an absolute cheap model. Here, a good buy depends mainly on luck, even if a little more expensive models are more likely to have a longer life. Both the life, as well as the accuracy depend on the clockworkfrom. There are differences here, but these are only of importance if it can be learned from which manufacturer the built clockwork is. As a rule, this will only be possible with very expensive watches. Here, however, quality and accuracy are not necessarily synonymous. Expensive watches have hand-made movements and are often only available in limited quantities. Due to the technical characteristics a certain inaccuracy is tolerated. Even mass-produced watches may have a certain degree of inaccuracy, which is why it is more a question of choice, or whether the clock should be a pure commodity, or even has a real collector’s value. If particular emphasis is placed on high accuracy, are radio Controlledthe best choice. In this case, a second display makes sense. However, since it is at a wall clock always a decorative object, in many cases the design is of crucial importance.

The design of a wall clock

For choosing the right one wall clock In addition to the quality, especially their appearance plays a big role. The clock will hang clearly on a wall and decide whether the overall concept of decoration and furnishing results in a harmonious overall picture, or whether parts of it appear out of place. For example, a gilded, elaborately crafted cuckoo clock is certainly to be regarded as a beautiful horological work of art, but it fits under no circumstances in a modern apartment with straight lines and at best some chrome elements. The choice between an analog clock and a digital clock also depends on which of the two variants looks better. Only in a nursery should an analog clock be given preference, so that children learn to read the clock correctly from an early age. Another design option is provided by analog clocks whose dial is decorated by different motives and thus has a special meaningfulness. Ultimately, it remains to be noted that the variety is enormous, and that a wall clock should be chosen according to personal taste and budget.