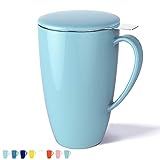 The tea cup for a very special tea experience

If you want to enjoy your tea in the traditional way, turn away from the teacupfrom and to tea cup out. The tea cup is the original pot for tea drinks. It can be embraced while drinking with both hands and gives the drinker a special feeling of security through the hand-warming effect. The shell, also known as Chawan, is still used today in all sections of the population of Japan. It is the main purpose of the tea ceremony. Actually, that comes tea cup from China. There it was used by Buddhist monks. Japanese monks spotted them there and took them to Japan. At first, in the early Middle Ages, only aristocrats and monks drank in Japan. Therefore, the first Japanese tea cups were richly decorated. A tea cup with paintings, ornaments or floral motifs reminds of this very early tea tradition.

Even in China, there were not just simple tea cups. A special form of tea bowl is the Gaiwan, which developed from the simple tea bowl, the Chawan. A Gaiwan consists of a saucer, a bowl and a lid. Since the tea bowl was the only tea set and the tea was brewed in a vat, the main focus was on her. From this developed the variety of tea cups available today.

After the custom of tea drinking spread throughout the population in Japan, the shape of the tea cup was simplified. It was made of ceramic and became an everyday object. But even this tea cup is a special piece of art in itself, which meets a special aesthetic claim.

The texture of the tea cup

Tea cups are made of materials that are not strong heat conductors, so they do not get too hot when grasping with both hands. Therefore, no metal tea cups are offered for ordinary. Raku tea bowls made of a special ceramic material commonly used in Japan enjoy a high reputation.

If you want to drink your tea from a tea bowl in the future, there is a wide range of tea bowl variants to choose from. They are not only made of ceramics, but also of glass, porcelain or even wood. This includes a lot of handmade tea cups. For example, hand-blown or hand-made. Real connoisseurs will find a tea bowl made by hand, because in Japan there is a tradition in which every tea lover goes in search of the tea bowl, which fits very well with him and finally finds them. In that sense, a good tea cup should be a very individual drinking vessel. In the best case, it is not only suitable for drinking tea, but also for preparing the tea. Therefore, tea trays made according to ancient tradition have a shape that is pleasant to hold and also facilitates the preparation of fine powder tea. Especially tea cups in spherical shape like the Chinese Gaiwan meet these expectations.