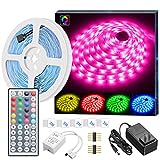 Indirect lighting ensures a cozy atmosphere in the bedroom, kitchen and living room. Today, even without electricians and structural changes, modern lighting solutions such as LED strips make it possible to bring atmospheric lighting into the home. The energy-saving light emitting diodes (LED) set no limits to creativity. They can be mounted on any surface and expanded without much technical know-how to impressive light installations. Whether for the backlighting of a flat screen TV, for floor or ceiling lighting or to put pictures and furniture with light in the limelight – most ideas can be implemented simply and cheaply thanks to the simple way in which LED strips work. But before buying the light-emitting diodes, it is good to know something more about their function.

The function of LED strips

Commercially, the LED strips are available by the meter, rod or roller. On a flat band small LEDs are installed at regular intervals. Depending on the distance, number and power of the LEDs, the strips emit more or less light. In terms of function, the strips, also referred to as LED strips or LED strips, hardly differ from other LEDs. They also work with DC voltage (12 or 24 volts) and require a transformer (power supply) to operate. This converts the AC power coming from the socket into DC, which finally lights the LEDs. A big advantage of LED strips is compared to other bulbs low power consumption. A 5 meter long LED strip with power adapterFor example, often requires little more energy than a standard 25 watt light bulb. Another advantage of the LED strips is that they hardly emit heat (in the 12 volt versions). This also makes it possible to illuminate heat-sensitive objects and materials. For 24-volt versions, however, must be provided for a sufficient cooling air supply.

Fixing LED strips at the desired location is child’s play. Except the LED Stripes themselves are only a pair of scissors and double-sided duct tapeneeded. The latter is already included in many LED sets, so no additional mounting material must be purchased. Due to their flexibility, the LED strips can be easily placed around angular and round objects. Even sharing the LED Stripes is possible with many products. For example, the Auralum Flexible 5M 2835 72W LED strip. At a distance of a few LEDs, the manufacturers with a cut mark give users the opportunity to strip with a household scissorsto sever. If required, the ends can be reconnected using quick connectors such as the XF-Life connector set without soldering. With corner connectors like the Leorx LED Strip Connector 5050, this is even possible around the corner. This makes it possible, for example, to illuminate rectangular or square objects such as pictures or ceilings.

LED stripes in white or colorful

LED strips are in white and as RGB LED stripsoffered. Warm white LEDs are most commonly used. They have a similar light temperature as the light bulbs, which have meanwhile disappeared from the market, and provide a real feel-good atmosphere. For the hobby cellar and the study cold white LED strips are recommended. Their light has the temperature of daylight rather and promotes concentration. In the home cinema or party cellar it may also be a bit more colorful. Here you can find RGB LED strips like the Tenlion 5M 5050. They provide the right light for every mood. Over a remote Controlcan be easily changed from the couch between red, blue, green or yellow as well as cold white, warm white and countless other shades. In addition, they often bring integrated lighting programs for an automatic color change or a light band effect, which is indispensable at parties.

LED strips for wet room or outdoor use

LED stripes also provide light accents in the bathroom, on the balcony or on the terrace – provided they are suitable for the humid environment. Corresponding products should carry the addition of IP65 or, even better, IP67 or IP68 in the name. For example, the LED strip ALED Light IP67 RGB 5050 with 300 LEDs. The addition indicates that the strips are at least protected against splashing water, better still against a direct jet of water. However, this information usually applies only to the strips themselves and not to the power supply. Here it is important to play it safe and to inform the dealer beforehand about the watertightness of the transformer.