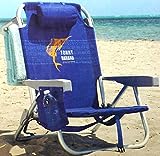 Whoever travels to the German coast knows him: the beach chair, The large, covered seating with footrests, Roof and armrests have little in common with modern garden or beach chairs made of aluminum tube and plastic fabric, at least visually. In fact, the beach chair is the predecessor of the modern loungers and chairs, which are collapsible with taken to the beach, on patio and balcony for comfort and in some garden.

The basket maker from Rostock, however, had not thought up the beach chair himself, but made it to order by Elfriede von Maltzahn. The noble lady suffered from severe rheumatism and still liked to sit on the beach in Warnemünde. She needed one to make the stay more comfortable for her windshield, a backrest and sun protection, The model attracted attention and proved so practical and pleasant that Bartelmann made only a few modifications and soon could open the first beach chair rental Germany. In the following years developed from the single-seater two-and three-seater, on the North Sea, the models in the design a little edgier and rougher, on the Baltic Sea and softer rounder. Ausklapptischchen and foot rests came in the course of time to make the seating even more comfortable. The superstructure of the first beach chair became movable, so that it could be folded, and from the pure seating became a semiconductor and then a deck chair, Countless variants developed. Beach chairs are still common on both the North Sea and Baltic Sea coast, and they are still woven by hand. It takes a whole day to make such a basket. To the original chair came armrests, cushions, awnings and rainproof roofs, storage space under the seat flap (for sand toys and other) as well as bars and locks for theft protection. From the simple one beach chair became a complex seating system. Individual models can accommodate up to six people, are equipped with round windows and have a right table in the middle. Mobile are not these facilities, they usually remain where they were once set up.

A very different thing is folding, mobile beach chairs made of aluminum or steel tube. This tube picture the basic structure, on which seat and backrest, less often also armrests, are stretched from textile material. These textiles can be made of cotton or linen fabric, but are usually made of polyester fabric or nylon on cheaper models. The synthetic fibers are according to the manufacturer less susceptible to humidity, UV radiation and heat. The modern one beach chair is collapsible, comes in a matching bag with carrying straps and can be taken with you every trip. For balcony, terrace and park, this model also offers, it is as Angler chairand in the extremely light version also popular with hikers and campers. These light chairs do not offer wind and sun protection, but additional sun or wind sails, so-called beach shells or parasols have to be provided.

Not mobile, yet light

Omnipresent on the beach as well as in the home area is the typical Garden chairmade of plastic. These plastic chairs are characterized by an extremely low weight, they are stackable and easy to clean. In their light and simple design, these chairs are most reminiscent of the beach chair which Ernst Freese developed in 1971. At that time, the chair was still made of pipe and wickerwork, and a semicircular steep screen behind it provided shade and light wind protection. The chair itself hardly differed from chairs for the interior. And so it is not even clear who came where and when the idea first to put a chair on the beach and sit down on it. It is certain that Bartelmann’s beach chair, developed in 1882, was part of the development. At that time, people were increasingly moving outside, they wanted to enjoy nature and regenerate themselves. New was, that you actually had the leisure time and now needed the appropriate furniture.

From a few euros to several thousand

Today, the range of beach chairs is large, confusing and really diverse. There are simple plastic chairs for very little money, there are high-quality furniture made of natural materials, but also the classic beach chair. The is now also made of synthetic fibers. The already described camping or fishing chairs are priced somewhere in between. Material, processing, construction and manufacturing country are reflected in the price of all beach chairs.