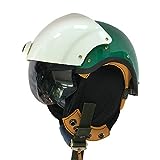 For motorcycle and moped riders, the traffic is not safe. The two-wheeler usually comes in accidents with cars the short straw, because it has no crumple zone, a larger blind spot and a poorer grip than a car. Due to the general helmet duty, which exists since 1979 in Germany, two-wheeler drivers should be urged to protect at least the most important thing – their head – accordingly. Motorcyclists and moped riders are spoiled for choice because there are many different helmet types. For one, there is the helmet, which also protects the face and chin next to the head, neck and forehead area. A hinged visor lies in front of the face. Full-face helmets are the safest type of helmet for motorcyclists, but keep the driver from the outside. Many motorcycle riders, however, lack the feeling of freedom that arises when the wind blows their faces. As an alternative, there are so-called braincaps, which cover only the upper part of the head above the ears. Braincaps are usually very thin half-shells, which sit without a visor on the head. Depending on the model, they are usually used as helmets, but offer little protection in the event of an accident. But the driver also has the greatest sense of freedom for them, because they are very small, handy and lightweight and cover little. Open face helmets are a compromise between safety and an open feel. They are also known as 3/4 helmets and cover the neck, head and forehead, but not the chin or the face. Sometimes there are extra visors to protect your face from the biting wind, but these are optional. As a combination of jet and full-face helmet, there are still flip-up helmets, modular helmets or crossover helmets, which can change more or less variably between the two helmet forms.

Compared to full face helmets, the unprotected chin part is of course a definite disadvantage in open helmets. In the scene is generally argued about the safety of the helmet type ‚and the ADAC even advises in general from open helmets. However, the fact is that you can get them with and without the ECE standard exam, so they can offer a certain standard of security. ECE stands for Economic Comission for Europe and its regulations are a catalog of internationally agreed specifications for technical characteristics of motor vehicles and related equipment – such as helmets. The ECE-norm 22/05 in particular is a test regulation of Europe and a quality feature especially for helmets. If you do not want to forego a certain standard of safety, you should pay attention to the ECE 22/05 label when buying a Jet Helmetes in any case. Mostly it is sewn on the chinstrap or in the lining. Incidentally, the label must always be sewn with cling film so that it is resistant to abrasion. Incidentally, the ECE examination also ensures that you do not suffer any disadvantages in the event of an accident. This label assures that the tested helmet will meet certain standards in terms of outer shell resistance to chemicals, field of view size, shock absorption values ​​(as determined by drop tests), the shape and size of the damping shell, and the size of the viewing window of the chin strap and its closure and the reduction of the Head Injury Criterion (HIC). Furthermore, it is especially tested on smaller models, how easily they can be stripped off, so as to prevent the helmet from slipping off the head during an accident. Helmet duty does not necessarily require an ECE license plate, it merely has to be a „suitable helmet“, but it is not further defined. But with the ECE label, you’re safe.

Typical application of the helmet

Open helmets are especially popular for their retro look. On large scooters, mopeds, mopeds and scooters large integral helmets often appear out of place, which is why open helmets are particularly popular here. Especially with very old two-wheelers, such as a Simson Schwalbe, the modern design of a full face helmet is often not desired. For chopper and cruiser riders, the look of the helmet is also part of the outfit. On Jet Helmet fits in here better in the overall picture.

Variations of the open face helmet

Variations can be found not only in ECE-tested and not ECE-tested models, but also in a variety of different designs. The classic Jet Helmet has no visor and no chin guard, but sometimes a small, frequently foldable sun visor or even a pair of glasses. Visor helmets also have a visor attached, which can cover only the eye area or the whole face. This species has increased protection against insects and wind, but still no chin guard as the integral helmet. A slightly increased abrasion protection for the face can also be found in visor helmets. Flip-up helmets are similar to full-face helmets, but with them, the chin section can be folded away at will, but not decrease. Special modular helmets represent another compromise between jet and full-face helmets, as here the owner has the opportunity to remove the chin area completely and from an integral home Jet Helmet and vice versa. With such a modular helmet can be weighed before each trip between increased safety and weather protection and the airy ride.

The advantages of the jet helmet summarized

– Of the Jet Helmet is particularly airy, which makes it popular in the summer.
– It is also good for wearers of glasses – a tight visor does not press on the temples.
– The look is special, it is part of the look for many bikers.
– It is lighter and more manageable than full face helmets – that’s why it is often used as a second helmet.
– He is safer than Braincaps.
– Open helmets are easier to remove after an accident.

The disadvantages of the Jet Helmets summarized

– Due to the missing visor is protected neither from wind nor from insects.
– Significantly less protection through missing chin part: the face may be completely unprotected in the accident.
– Lower weather protection, for example, in the rain.

As a driver of a motorized two-wheeler, wearing a helmet is mandatory in Germany and most other countries. Since it is often unspecified what kind of helmet can be used, there is a wide choice for riders. Open helmets are a compromise between appearance, safety, handiness and weather protection. However, in order to avoid any problems with the insurance and to guarantee a certain level of protection, it is strongly recommended to pay attention to the ECE 22/05 test label. This seal guarantees that the helmet complies with certain standards and that the helmet is suitable for use on the road.